Windies thrash NZ to enter World Cup on a high

BRISTOL, England, CMC – Shai Hope struck another classy hundred while Andre Russell and Evin Lewis lashed half-centuries as West Indies flexed their muscle to brush aside New Zealand by 91 runs in their final official warm-up match, and find precious momentum ahead of their World Cup opener against Pakistan on Friday.

Sent in at Bristol County Ground yesterday, West Indies amassed a mammoth 421 off 49.2 overs, with Hope stroking a better than run-a-ball 101, Russell blasting a 25-ball 54 and Lewis gathering exactly 50 off 54 balls at the top of the order.

There were several cameos along the way as captain Jason Holder smashed 47 from 32 balls, veteran Chris Gayle carved out 36 from 22 deliveries while rookie Shimron Hetmyer gathered 27 from 24 balls.

Though the warm-up matches are not accorded ODI status by the ICC, the total surpassed the Windies ODI best of 389 made against England earlier this year in the Caribbean.

In reply, New Zealand perished for 330 in the 48th over but got a magnificent counter-attacking 106 off 89 balls from wicketkeeper Tom Blundell. Captain Kane Williamson stroked 85 from 64 deliveries but the target was always well beyond the Black Caps especially after they found themselves stumbling at 33 for three in the 10th over.

Seamer Carlos Brathwaite proved expensive but was the best bowler with three for 75 from his nine overs while left-arm spinner Fabian Allen supported with two for 47.

West Indies were propelled early by Gayle who inspired a 59-run opening stand off 44 balls with Lewis.

The veteran left-hander looked imperious in belting four fours and three sixes in his first innings since arriving in England, before chipping left-arm seamer Trent Boult (4-50) to mid-off in the eighth over.

Hope, who struck nine fours and four sixes in a typically polished innings lasting 86 balls, then added 84 for the second wicket with Lewis and a further 48 for the third wicket with Darren Bravo (25).

The in-form right-hander reached his half-century from just 39 balls in the 20th over and required a further 45 deliveries to reach his third triple figure score in his last seven outings in the 36th over.

Lewis had counted six fours and a six in reaching his second straight half-century when he pulled seamer Jimmy Neesham to deep square in the 18th over, and Bravo followed in the 24th over, run out by Henry Nicholls’ direct hit from cover after a mix up with Hope over a single.

West Indies were in command at 202 for three at the end of the 25th over but then suffered a slump which saw them lose three wickets for 51 runs in quick time.

The left-handed Hetmyer struck three fours and a six before picking out deep square leg with left-arm spinner Mitchell Santner in the 31st over and Hope finally departed in the 36th over, mis-timing a drive at Boult to mid-off.

When Nicholas Pooran was run out in the 38th over for nine, West Indies were 285 for six but Russell and Holder put on a sizzling 82 for the seventh wicket to put their side back in control.

Russell bludgeoned seven fours and three sixes in reaching his fifty off 23 balls while Holder counted three fours and sixes, helping West Indies to gather 115 runs from the last 56 deliveries of the innings.

Facing a difficult run chase, New Zealand’s task became even more complicated when Martin Guptill (5) skied left-arm pacer Sheldon Cottrell to Bravo on the leg-side in the fifth over and Nicholls (15) sliced seamer Kemar Roach to Holder at mid-off in the seventh over. 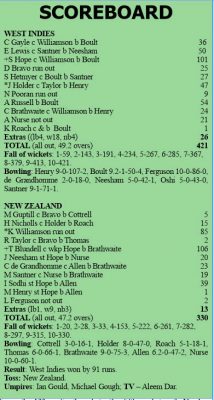 When Ross Taylor (2) gloved a lifter from speedster Oshane Thomas to Bravo in the gully in the 10th over, New Zealand looked like falling cheaply but Blundell and Williamson saved face with a 120-run fourth wicket stand.

Blundell punched eight fours and five sixes, also posting 69 for the fifth wicket with Neesham (20), before falling in the 41st over.