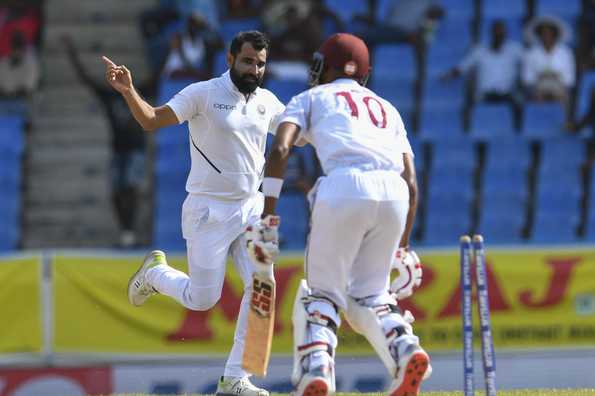 West Indies captain Jason Holder was quite confident on the evening of the third day of the Test at Antigua that the pitch is not one "where you can just blast the batsmen out". It gave him the belief that if they could take some early wickets and get into India's lower order quickly, and with the second new ball available soon, they could go about chasing for a very famous win, and in worst case scenario, a draw.

Indian skipper Virat Kohli was dismissed quite early on the fourth morning but that is how far Holder's wishes could go. Player of the match Ajinkya Rahane, scored his 10th Test century and first in more than two years, added 135 runs with Hanuma Vihari, and put the game away from the reach of the West Indies.

When India declared at 343/7 as Vihari fell seven short of a well-deserved maiden Test ton, West Indies' prospects of playing out 140 overs for a draw looked the more realistic option than a world-record chase of 419 runs - one short of the current record set by the West Indies in the nearby Antigua Recreation Ground in 2003.

After all, West Indies bowlers led by Kemar Roach and Holder had bowled skilfully but it proved to be quite hard for them to dislodge the Indian batsmen easily, the second time around. That part of Holder's statement appeared to hold true. Maybe, West Indies could squeak out of Antigua with a draw which would have felt like a win. After all, anything is possible on a day when Ben Stokes played an innings of a lifetime to snatch victory that was firmly in Australia's hands at Headingley.

Sure India are the top ranked side in the world and West Indies eighth, but as recent history informs us, teams are hard to beat in their home conditions, i.e., it is difficult to win away from home. In 2016, after conceding a lead of 304 runs, West Indies stonewalled well to earn a draw, the architects of which - Roston Chase and Holder - are still the glue in the middle order.

The series win earlier this year at home over England, and India reassembling their Test side with questions of batsmen around the core of Cheteshwar Pujara and Kohli, West Indies did have reasons to feel good about their chances in Antigua.

West Indies had landed some body blows on India; three quick wickets on the morning of Day (25/3), three more before India raised 200 and dismissed the outrageously talented Rishabh Pant on the second morning with the score reading just 207. India, even though had mixed results from their tours to England, South Africa and Australia, had learned a valuable lesson that they cannot lose 5-6 wickets in a session and expect to compete against a quality side. Thus, their focus has been that if they lose quick wickets, the batsmen coming in next are to stop the bleeding first and then look to rebuild and rebound from the blows.

Rahane, first with Rahul and then with Vihari, shored up the innings. Ravindra Jadeja along with Ishant Sharma and Jasprit Bumrah ensured India had a competitive first innings score. In the second innings, India once again had to be rescued from 60/3 by Kohli and Rahane, and when the sun set on the third day India held a relatively safe lead of 260 with 7 wickets to spare.

Every time West Indies felt like they had gotten their hands around India's neck, the visitors found a way to wriggle out. Restricting India on essentially a flat pitch to under 300 runs; would have satisfied Holder as he made the decision to bowl first, but having removed both Kohli and Pujara within the first 10 overs, it was a great opportunity to take control of the match missed.

In the first innings reply, their top eight batsmen got to double figures and there were five partnerships of at least 36 runs, and yet, West Indies found themselves 75 runs in arrears. Every time West Indian batsmen laid the foundation, India's bowlers led by the "reliable" Ishant bulldozed it. Even if one or two of those five partnerships had reached triple figures, West Indies would have established a stranglehold on the Test but they were left to rue what could have been.

Against top quality opposition, you only get so many opportunities to fluff your lines. If you don't take full advantage of the miscues, the hammer comes down eventually smashing you to bits.

When the fourth innings began with little less than four-and-a-half sessions of play remaining, there was a remote chance that West Indies would leave Antigua unscathed. They just needed to get to Tea with no damage.

India took a double-barrelled shotgun of Bumrah and Ishant to the Windies top order from point blank range and blew it to pieces. Five wickets for 15 runs in less than 8 overs! Perhaps, you can blast a side out on this pitch after all if you could do whatever voodoo Bumrah was doing with the ball. On either side of Tea, Bumrah delivered high quality seam and swing bowling that sent stumps cartwheeling and batters groping like blindmen and returned figures that looked like passcode to unlock a phone, 8-4-7-5.

What began as a contest ended as a 318-run thrashing of the West Indies without needing the fifth day. With only four days before the start of the next Test at Sabina Park, and their pre-series confidence completely rocked, West Indies are going to be left with the most nagging of feelings: what if.