Twenty-nine companies on Tuesday responded to government’s retender for Request for Proposals (RFPs) to market Guyana’s share of oil from the Liza Destiny FPSO, and while ExxonMobil again did not submit a proposal, its partner in the Stabroek Block – Hess – was one of eight new companies vying to win the contract.

Minister of Natural Resources Vickram Bharrat yesterday told the Stabroek News that in addition to the interest shown by the large number of companies, George-town has received request propositions from other governments that want to purchase crude directly for their country’s use. He said that the process for securing a company to sell the crude to, as per the notice, will proceed as government explores options of selling directly to governments. “A few governments have indicated their interest in buying crude for their country and that is something, at the policy level, we may explore in the future,” he said while expressing elation at the number of RFPs submitted. 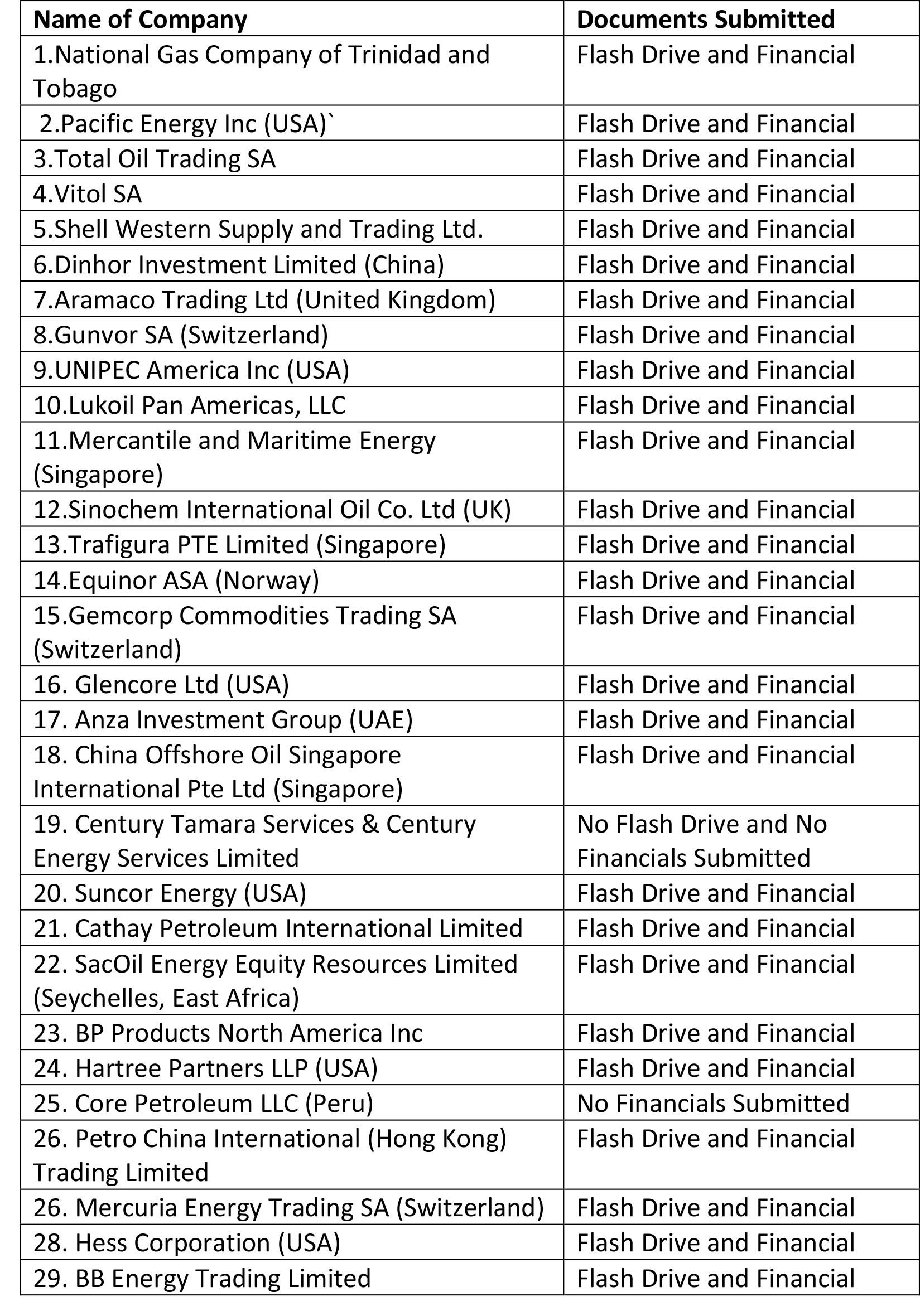 On the other hand, some companies submitted RFPs using different countries of registration than what was stated in their first tenders.

The RFPs were opened at the National Procurement and Tender Administration Board, Ministry of Finance Compound, Main Street Georgetown, following an extension from last week Tuesday as the agency was forced to suspend its operations, due to staff members testing positive for COVID-19.

Last month, the PPP/C government announced that it had scrapped the shortlist of 19 companies, from the 34 that had participated in the first process under the APNU+AFC government back in April of this year, while the country was in the middle of a political crisis and awaiting results of the March 2nd General Elections. The current process sees the omission of a prequalification phase.

It was Vice President Bharrat Jagdeo who made the announcement that the new government would go to a retendering. He explained that the decision was made to give companies that had not submitted a proposal a chance to do so as some may have withheld their participation as the process had been launched by a caretaker government at the time.

The Minister of Natural Resources told Stabroek News that the large number of submissions was demonstrative of increased business interests and competitiveness here and will give Guyana an array of choices.

He explained that similar to what was planned by the previous government, a process of getting an independent and expert team of evaluators will be done.

“We want to have an independent team so there is no compromise of the process; to ensure the integrity. We will set up an independent evaluation team. Of course we need experts because crude marketing is not as easy. We have the last team and we will see who we can incorporate,” he said.

Pointing to the number of submissions, he declared, “It is good for Guyana. It will give the team a wider array of choices. People are recognizing us and we have to ensure that we get what is best for the country. I cannot over emphasise that enough. I am pleased at the response and it shows people are interested. They want to do business with us the Government and Guyana. These large multinational companies will give us the scope to get a company that meets all the regulatory and other requirements.”

And as government plans for the future, regarding oil, Bharrat said that it has to now start exploring if one marketer will be enough as ExxonMobil ramps up production from other wells. “The Liza Destiny FPSO is the only one at this time but there will come a time, very soon, when we will start producing from the Liza 2 Well and then Payara and so forth…we may look at having two companies but that is something for future planning,” he said.

Guyana’s next lift, the Minister has said, will be in mid-November and he explained that the evaluation process for the new tender “will take about six weeks”.

The Table below gives the names of the companies and whether they submitted the required hard copies of documents, along with a flash drive.  The criteria includes that they submit their certificate of incorporation, certified true copies of memorandum and articles of association, a company profile showing the company’s capabilities, company tax clearance certificates for the last five years, and a copy of the company’s health, safety, and environmental policy. In addition, they were also required to include their annual turnover over the last five years, code of conduct, details of their volume of crude oil trading and marketing, evidence of verifiable similar services and specific relationships and reference and testimonials for similar work.

They are also required, according to the criteria and terms set, to submit two hard copies in a sealed envelope and an electronic non-editable copy on a thumb drive. However, in the case of any discrepancy between the hard and the electronic copies, “the hard copy will prevail.”

Tweet
America came out ahead; Guyana fell farther behind
“We don’t have time for travail and cavil” – PNC M...