has been cremated in Mumbai with full state honours.

Mangeshkar, whose voice was the soundtrack to hundreds

and she recorded thousands of songs in 36 languages.

Two days of national mourning will follow the funeral

and the national flag will be flown at half-mast throughout the country. 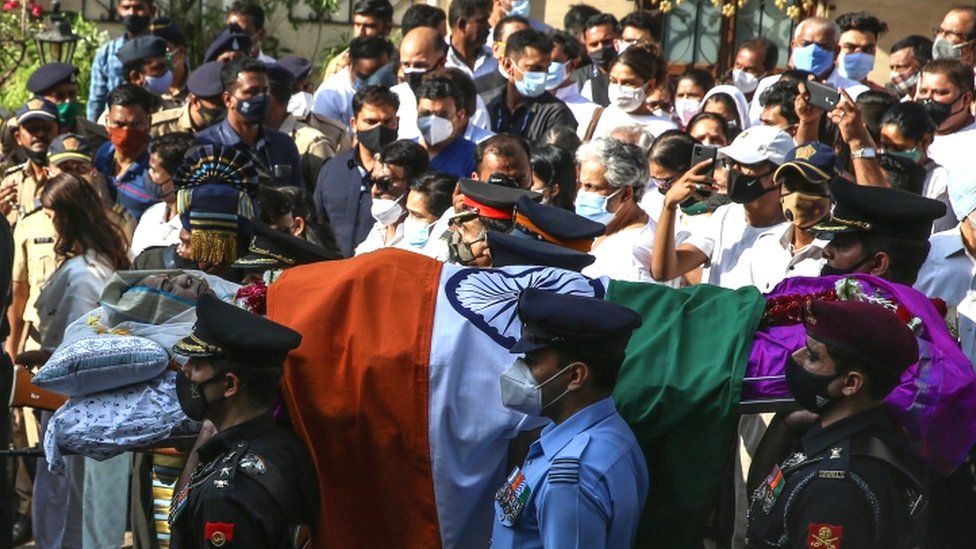 where TV channels broadcast rolling coverage of her death.

"The subcontinent has lost one of the truly great singers the world has known,"

Less More
08 Feb 2022 13:36 #395207 by chairman
I thoroughly enjoyed your feature on Lata Mangeshkar, “Mass excitement when Lata visited Guyana in 1980” (SN 2-6-22) and would like to share some personal reflections on the departed iconic artiste. I was in New York in 1980 when I heard she would be coming to Guyana later in the year on October 1st. I immediately booked a ticket to see her, not only because I wanted to listen to her in person, but because of what she represented to my family back in Guyana. For my generation from the 50s and 60s, Lata was the voice that soothed us as babies with the song “Ayega, ane wale, ayega” (Those who want to come will come.). Made you fall in love at ten with Sara Bhanu with her (Lataji’s) “Ehesaan Tera hoga…” (I would be indebted to you if you let me tell you what my heart desires), woo girls as a teenager with “Jhilmil sitaron ka aangan hoga” (There’ll be shining stars over our courtyard), be the background of maudlin homesickness in my college days at Brooklyn College in my 20s with “Ai mere Dil-e-nadaan (Oh my innocent heart) and make me request her rendition of the medieval poet Meera Bai’s “Payoji Maine, Ram Ratan Dhan payo” be played at my funeral.

In 1967, when both Mohamed Rafi (my favourite male singer) and Mukesh both visited Guyana, as a poor schoolboy, I could not afford to pay the entrance fee to their shows at the local cinemas and only glimpsed them from afar. I’ve never forgotten the intensity of my disappointment and was determined not to let my music-besotted family in “hard-guava-season” Guyana experience the same with Lata. I flew in on Sept 28, Lata’s birthday, when she was performing in Trinidad and bought more than a dozen tickets for her show at the National Park (not the National Cultural Centre). We sat in the front row and could see her pleasure at the reaction of her doting fans. At one point, she remarked that she could not understand how we could react so knowingly to the nuances of her renditions when we couldn’t understand Hindi. Earlier, as was recorded by her manager, she and her troupe were puzzled when a band played the song “Gumnaam hai koi” (It’s someone anonymous) in welcoming her while being presented with the key to the city by then Mayor, Cecil D. Persaud. But even though the Indian movies with subtitles translated the songs, it was not the words that touched us; it was the sentiments evoked by the music and her voice, which was an unparalleled instrument.

The closest analogy is western audiences reacting to Opera when they do not understand German, French or Italian: you apprehend the world emotionally and directly, unmediated by “words” but through sounds. “Mass excitement” hardly describe the reaction of the Guyanese fans after Lata touched down here: it was more like “mass hysteria”. It was amazing to see my mother, who was born the same year as Lata and her children enjoying the same artiste. Her grandchildren and great grandchildren did the same. Om Sadgati: may her atma/soul be liberated.

Ravi Dev
Always tell someone how you feel because opportunities are lost in the blink of an eye but regret can last a lifetime.
cricketwindies.com/forum/