Suriname to sell their oil blocks, while Guyana gives away ours for free

Suriname to sell their oil blocks, while Guyana gives away ours for free 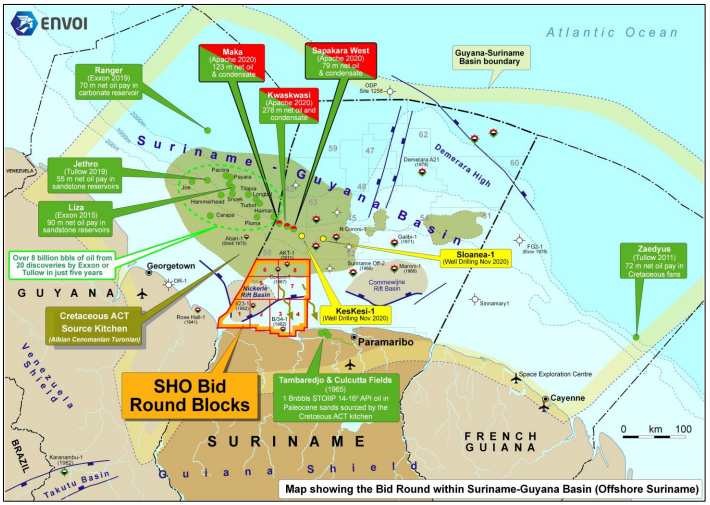 Kaieteur News – Governments around the world make big money when they award oil and gas contracts by open, competitive bidding processes. They also ensure that when such a process is upheld transparently, the best and most eligible companies are chosen to do the job.
This is the process that Surinamese state-run oil company Staatsolie has taken, as it has announced that eight oil blocks offshore of the country are up for bidding.
According to the bidding document’s executive summary, the eight blocks on offer total to over 13,524 km2 of unexplored, but “highly prospective” acreage in the western part of offshore the Dutch-speaking country, with April 2021 as the due date for bids.
Notably, these eight blocks are located in the Guyana-Suriname basin, where Guyana’s Stabroek Block, ExxonMobil and its consortium of oil companies have made 18 discoveries, totaling to in excess of 9B oil equivalent barrels. The Suriname government now wants to capitalize on Guyana’s finds, which have led them to bid those unexplored blocks.
Capitalising even further on its opportunities, the company has been studying a large shallow water acreage offshore Suriname, for which it has amassed a wealth of data.
On its website, the state-run oil company explained how its work in the near shore areas, though not yielding material discoveries, have already done enough to confirm the “potential” of oil in the coastal area.
Kaieteur News had reported on how data amassed about certain areas could increase the value of the acreage. It is for the same reason that Guyana has been urged by industry experts to ensure it publishes data on relinquished blocks as soon as possible.
Notably, the country could rake in hundreds of millions of dollars in signing bonuses for the shallow water block(s). It has already started to do so for its blocks since ExxonMobil’s continued de-risking of the Guyana-Suriname basin.
For instance, Total agreed to pay Apache US$100M for a 50 percent stake in the 1.4 million acre Block 58. That amounts to more than five times the paltry US$18M Guyana took from ExxonMobil for the 6.6 million acre Stabroek Block.
As has been reported in Kaieteur News, the Donald Ramotar administration had ignored the Guyana Geology and Mines Commission (GGMC) when the regulator advised that the government could facilitate competitive bidding acquiring Guyana’s oil block ‘C’, after at least four oil companies had shown interest in the area. Two of the interested companies were Repsol from Spain, and Royal Dutch Shell from the Netherlands, both major international players in oil and gas, as announced by a source.
Many have criticised Guyana’s contract with ExxonMobil as lopsided and unfair to the people of Guyana. Global Witness has calculated that the poor terms would cause the country to lose US$55B over the life of the contract. It has criticised Guyana’s leaders for the part they played in the signing away of the massive concession to the multinationals, ExxonMobil, Hess and CNOOC.
Despite facing international and local condemnation, neither of the major parties has shown interest in securing better terms for the people. ExxonMobil has even boasted that it has received assurances from the parties that the contract will remain intact, and that its projects will be allowed to move forward.

More posts from author
Thursday, 14 January 2021 PRESIDENT Dr Irfaan Ali gave a clarion call to Guyanese around the world to consider migrating back to Guyana
Monday, 11 January 2021 GUYANA today stands at an interesting crossroad. The nation is gearing up for the exponential escalation of its socio-economic development
Sunday, 10 January 2021 I READ former President David Granger’s exhaustive and exhausting New Year message
>